How To Stay Safe On Facebook While Scams Abound – Forbes Advisor Editorial Note: We earn a commission from partner links on Forbes Advisor. Commissions do not affect our editors’ opinions or evaluations.

Facebook is often billed as a platform for keeping up with friends. But in order to do so, users need to dodge scammers lurking there.

A new survey of 1,005 adult Facebook users who reported experiencing scams in the United States found that platform users are targeted in a multitude of ways.

Fifteen percent of respondents said they were asked to pay a fee to apply to a job, while 27% reported that someone asked them to send them money or gift cards to receive a reward. Both are prolific scams on Facebook and other platforms.

The survey, conducted by OnePoll for Forbes Advisor, found that respondents frequently encountered suspicious behavior while on Facebook, including receiving a friend request from someone they were already friends with or from someone they didn’t know. Receiving a message asking to click on a link was also a common experience.

These scams and phishing attempts (the fraudulent practice of what appears to be a well-known business or individual sending a message to a consumer asking them to provide sensitive information, such as a photo of their Social Security number card) can lead to serious consequences for consumers.

Thirteen percent of respondents said that someone used their stolen identification information (such as name, address, or Social Security number) to impersonate them; twelve percent reported that someone gained access to their financial accounts.

Meta, the parent company of Facebook, didn’t respond to a request for comment from Forbes Advisor on the survey data.

What the survey makes clear is that it’s becoming increasingly difficult for users to be on guard against such a wide range of scams on Facebook.

Social media has become a gold mine for con artists. In 2021, The Federal Trade Commission (FTC) found more than 95,000 people reported about $770 million in losses to fraud initiated on social media.

Investment and romance scams were the most profitable forms of fraud for scammers on social platforms. Con artists will create fake relationships to ask for money, or promise unrealistic returns on crypto products.

Read more: How To Stay Safe From Scammers Sliding Into Your DMs

Shopping scams are also common. One such scam is ads for products that show up in your newsfeed that look legitimate and may tempt you into making a purchase; however, the product may never show up. And if it does, it’s completely different from what was advertised, and usually of a lesser quality. The scam victim may then struggle to return the product and may not get their money back.

But even being the victim to a scam on Facebook isn’t enough to deter users from returning to the platform. Six out of ten respondents reported using Facebook several times per day, even though a majority of survey respondents said they’re concerned they’ll be identity theft victims in the future. 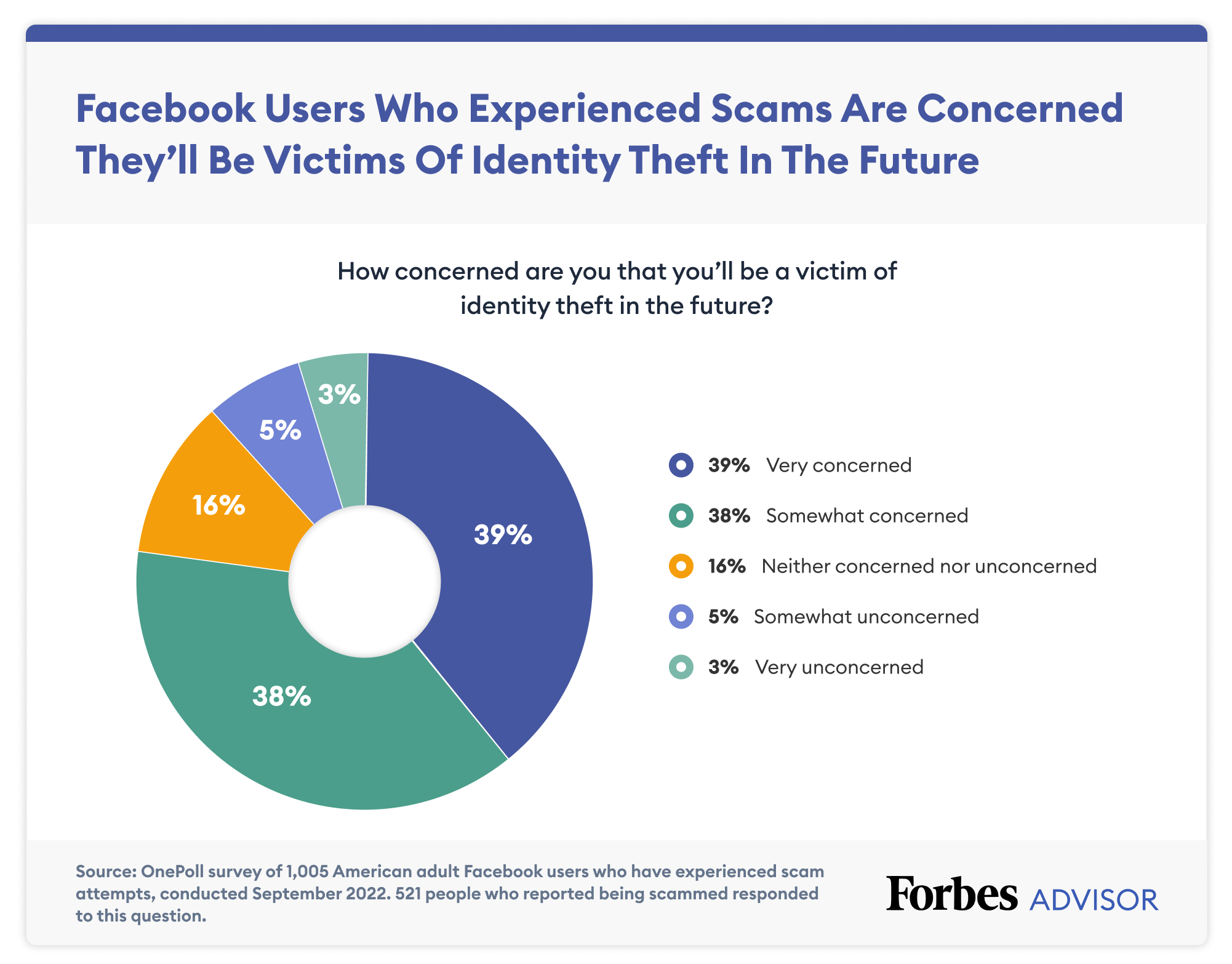 The cognitive dissonance of respondents frequently encountering scams but not closing their Facebook account is a testament to how breaches of trust don’t overcome how ingrained the app is in everyday life.

The #DeleteFacebook movement began in response to the revelation of the Cambridge Analytica data scandal. In 2018, it was found that the analytics firm obtained sensitive personality data on Facebook for as many as 87 million users without their consent. The FTC eventually fined Facebook $5 billion for violating consumer privacy laws—one of the largest penalties ever imposed by the U.S. government.

Despite the Cambridge Analytica scandal, there are still nearly 3 billion monthly active users on Facebook (although there are signs that users are starting to decline).

An article by Mashable found that despite not liking the platform, people have kept their Facebook accounts for a variety of reasons, including it being a requirement to log on to other platforms, needing it for work or school purposes and for keeping up with their community.

“For a lot of users, it isn’t that they don’t want to delete their Facebook — it’s that Facebook has become so intertwined with the way they live online that they can’t really escape it,” writes Christianna Silva, reporter at Mashable. “To leave Facebook would be to shift the way they interact with the internet.”

How Consumers Can Protect Themselves From Scams on Facebook

With social media scams continuing to be on the rise, including on Facebook, keeping yourself safe is a priority. Here are steps you can take to help safeguard your social media presence.

On Facebook, that additional credential can be tapping a security key on another device, using login codes from a third-party authentication app or entering a code sent to you via text message. You must enable this feature—it isn’t automatic for users.

Facebook notes that once you enable two-factor authentication, you’ll receive 10 recovery login codes to use if you don’t have access to your phone. Recovery codes can be stored safely in a password manager.

A common phishing scheme involves someone sending a video link via Facebook Messenger and asking if it’s you in the video. The link then takes you to a fake Facebook login page where you’re asked for your credentials— once you enter them, the scammer can access your account.

Phishing links are often short-coded, meaning they don’t indicate the address they link to. Scammers often use this tactic to trick people into clicking on them. If you’re ever unsure if a link sent to you is legitimate, you can enter it into VirusTotal, a free website that analyzes links to determine where they lead to and whether or not they may contain malware.

Scammers aim to take over accounts so they can send phishing links or spam to your network to steal more personal information or even get people to send them money.

3. Check out a company before you buy their products

If you see an ad for a product you’re tempted to buy, look into the seller first before making the purchase. The FTC recommends searching the company name online plus “scam” or “complaint” to see if they’ve victimized consumers in the past.

The FTC also warns consumers to never buy anything online from sellers that only accept payment by gift cards, money transfers or cryptocurrency as these payments are nearly impossible to reverse.

While freezing your credit won’t stop Facebook scammers, it can guard against potential consequences of identity theft. However, sixty-seven percent of respondents say they haven’t frozen their credit reports, despite encountering scams on Facebook.

Freezing your credit report is a process that blocks new accounts from being opened in your name. If you mistakenly provided sensitive personal information to a criminal while being scammed on Facebook, a freeze can prevent them from being able to open a credit card or loan in your name.

For a freeze to be most effective, you’ll need to contact all three major credit bureaus (Equifax, Experian and TransUnion) individually. You can do this online, by phone or by mail. All three bureaus will freeze your credit for free and it doesn’t affect your credit scores. Keep in mind that if you plan to apply for a new line of credit in the near future, you’ll have to contact the three bureaus individually to have them lift the freeze.

Read more: How To Freeze Your Credit The Crypto Crackdown Is Just Getting Started