Switzerland-based Pro Senectute beider Basel has teamed up with consultancy Metyis to launch its own NFT collection, with proceeds from the non-fungible token portfolio flowing to charitable causes.

Since its inception in 1993, Pro Senectute beider Basel has been focused on helping older people in the Basel region with improving the quality of their life.

In a pioneering move for a charity organisation, Pro Senectute beider Basel has been quick to venture into one of today’s most hyped technological developments – the metaverse. At 10am today, the NFT collection ‘Swiss Crypto Marvels’ is going live, in what is described as an industry-first mover in the non-profit scene.

Swiss Crypto Marvels consists of a collection of non-fungible tokens (NFTs) – virtual assets on the blockchain that can be collected, exchanged and traded. An NFT (also known as tokenized art) represents a digital certificate of ownership of an asset and is a unique, non-copyable original on the blockchain.

Based on the landscape photographs from Marcus Händel (well known for his pictures for Visit Switzerland), Swiss Crypto Marvels will see 4444 NFTs released across four pictures (NFT Lauterbrunnen, NFT Old Town Chur, NFT Alp Palfries and NFT Churfirsten), with buyers left in the dark which picture they are purchasing (the NFT Churfirsten for instance is the rarest with only 44 copies released).

With the proceeds of the sale, Pro Senectute beider Basel will fund a project aimed at building digital literacy among older people in the cantons of Basel-Stadt and Baselland. Each NFT is for sale at CHF66, meaning that sell-out would see the charity raise more than €300,000 for its good cause.

“We are proud to be one of the non-profit organisations to venture into the metaverse. One of our ambitions is to bring elderly people closer to current and future digital technologies and to empower them to use them themselves. Proceeds from the NFT collection will go to projects that enable elderly people to understand and use digital applications,” said Michael Harr, Managing Director of Pro Senectute beider Basel.

Bringing the NFTs to life

To realise its metaverse venture, the Swiss charity received cooperation from “several Swiss influencers” and support from Metyis, which led the creative design and technical implementation.

Dominic Olonetzky, a partner at Metyis in its Zurich office, explained what the firm exactly did: “With Pro Senectute beider Basel, we selected four pictures from Marcus Händel to turn into NFTs. Based on these wonderful pictures, we developed the idea of merging the image with a dreamlike object that points to our digital future.”

“Our design team collected topographical data that was transferred to the digital world using terrain modelling tools. They then began to imagine a mystical narrative that opens up a dystopian space. The final result is a blend of the original picture with futuristic objects – stimulating the imagination of the viewer.” 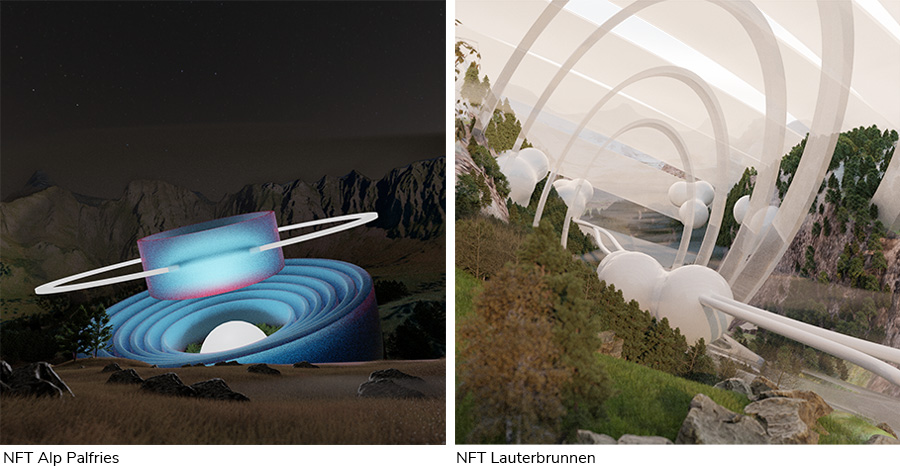 Sustainability at the core

With Pro Senectute beider Basel operating in the charity sector, aligning with its sustainability goals was an important requirement for the development work. Not an easy task for Metyis, given that cryptocurrencies and blockchain applications are known for their (significant) energy use.

“We were well aware of the negative environmental impact of blockchain applications and therefore tasked Metyis with developing a climate-neutral NFTs,” said Harr.

Meanwhile, to complete the full climate-neutral desire of its client, Metyis advised Pro Senectute beider Basel to offset the remaining emissions in cooperation with the Swiss climate protection organisation myclimate.

For Pro Senectute beider Basel, and the eldery in the Basel region looking forward to mastering digital skills, 10am today is the moment supreme. Harr looks forward with confidence, with pre-interest in the NFT reportedly high.

At Metyis’ side, Olonetzky said the firm is proud to have contributed to making an impact for Pro Senectute beider Basel – and most likely, beyond. “This initiative provides proof that even local non-profit organisations can have a real impact through blockchain technologies, specifically in the metaverse realm.”

“The metaverse is touted to become the ‘next world wide web’ and if it achieves this potential, it will cause a digital revolution. We’re proud to be at the forefront of the industry’s developments.” Crypto Scammed? This is What You Can Do